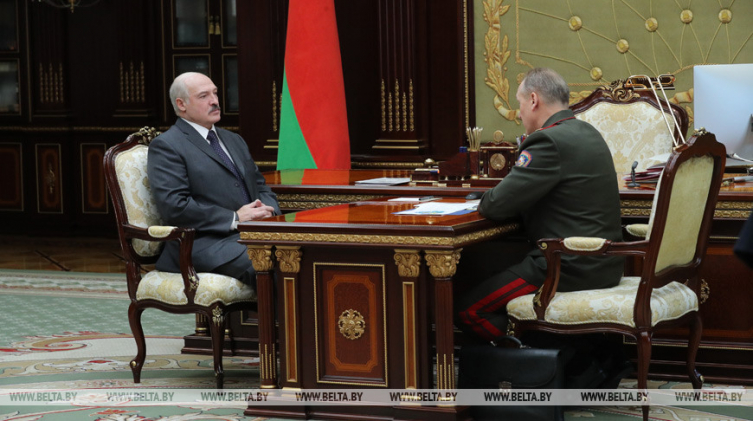 There is a high risk of wildfires in Belarus because of dry weather, Belarus President Aleksandr Lukashenko said as he met with Emergencies Minister Vladimir Vashchenko on 9 April, BelTA informs.

“As I've already said, we are such people who are sometimes too much focused on one problem and forget that there are other problems,” Aleksandr Lukashenko said.

In this regard, the head of state remarked that many people are focused only on viral diseases, the topic of coronavirus. “Even without comparison of the data from the previous year and this year. The situation in this frightful year is better than it was last year, the same goes about pneumonias. But all of us are focused on this problem,” the president remarked. “I always emphasize that the economy is a crucial element for us. All that will fade away (and it is fading away, you see what is going on in Europe). But the economy will stay, and it has a strong impact on people's lives.”

The head of state said that the weather is very dry in Belarus right now. “It is a bit frosty by night, the sun and winds make soils very dry in the morning. Actually, 40% of Belarus' territory is covered by forests. Besides, we always start burning grass in spring. All experts, biologists and others, are saying that it is dangerous for the soil and for organisms living in it. But people are still burning grass. Fires are our reality. Maybe, not in such a scale as in the neighboring countries; maybe, it is not that frightening, but we still have to deal with fires. And not with one or two fires, but with dozens of fires. And we are losing money because of that,” he said.

In this context, Aleksandr Lukashenko asked what is done to maintain fire safety in Belarus. “I've been informed today that we have an average fire frequency north of the Pripyat River. Fire frequency is high in the Pripyat region and in Ukraine. The weather is even drier there. What is going on right now? How are we dealing with it?”

The president also asked about the fire mortality statistics. “Unfortunately, it also happens. And much more people are dying from fires than from coronavirus. I have cited the data of Q1,” Aleksandr Lukashenko said.

“Of course, we do not deny that we must fight against diseases, including viral diseases. There is no emergency situation. Therefore, we do not engage the ministry. But I would like to listen to your opinion. What do you think about it? How do you see your role in the mitigation of this situation? Is it necessary to engage the Emergencies Ministry right now?” the head of state wondered.